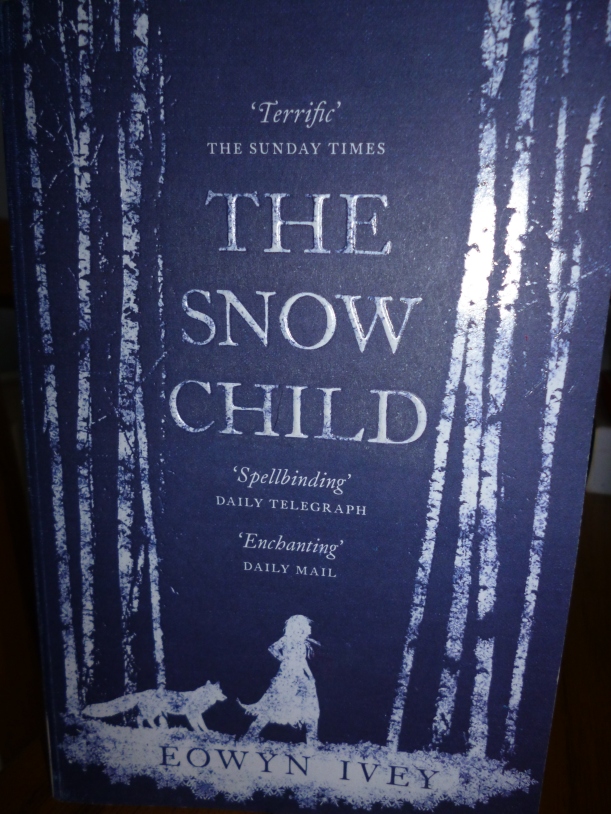 The Snow Child by Eowyn Ivey

I have just arrived back home after a drive from Yorkshire, where I spent the weekend. As I left, the sky was clear and blue but as I drove down the country, it was as if I was travelling into Autumn. Heavy rain was battering the windscreen and leaves were being blown across the road. Even the trees appeared to turn from greens and yellows to ambers and golds as I drove. It made such an impression on me as it is normally driving north that feels like this, not south!

Anyway, I digress. I think the seasons were on my mind as I had just spent a lovely Saturday afternoon in the company of The Snow Child by Eowyn Ivey. In this book the seasons, in particular winter, are an overarching concern for all the characters as they means survival, or not. The first snows and the coming of winter are beautifully described in this book and I got utterly lost in it, so much so that I ignored my poor parents for a good two hours whilst I finished it yesterday! I was surprised to find it was a first novel as the pace, plot, characterisation and imagery of this tale were all wonderful in my opinion. In addition to the fairy tale heritage I mentioned in my last post, this novel also made me think about the bond between parents and children. Both Jack and Mabel are completely transformed when Faina enters their lives. Faina also, although always a mystery, is changed by their love. Not having any children myself, it really opened my eyes to that kind of transformative, unconditional love that I’d never thought too much about before. Ivey manages to keep this love unsentimental and realistic as well which I thought was a huge achievement. I think this is done by introducing the slight pessimistic, brooding tone of loss that also runs through the book. Mabel accepts that Faina, one day, will leave and this is always an undercurrent in her thoughts, and eventually Jack’s too.

This novel also made me think back to the assertion (see my earlier post) that the American novel is summed up by the idea of ‘Frontier’. The ‘Frontier’ is certainly a central image and idea in this book, along with the love between parents and children I have already mentioned.  Mabel and Jack move to Alaska in their middle age for a new start and to unite together in a battle against the elements. By taming their patch of earth, with the help of their new friends, Jack and Mabel triumph against the harshness of an Alaskan winter and this gives them both self-respect and a deepening in their own love for each other, despite being married for many years. Again, Ivey managed to portray this in an aspirational, almost romantic way, but steers clear of sentimentality, with no illusions about the harshness and life-threatening struggle for survival that Alaska presents.

I would thoroughly recommend The Snow Child, especially with our own winter arriving here in the UK. I enjoyed reading about Alaska so much that I am now going to follow-up the books on the rather wonderful Alaskan reading list at the back of this book. Why don’t more publishers do this – I think it is a great idea!

I have just received my Waterstone’s (I know it doesn’t have an apostrophe now, but it just feels so wrong not to put one – my blog, my rules!) September email bulletin and got quite excited! Philip Pullman is choosing his favourite Grimm’s fairy stories for a beautiful hardback. It is going to be published on 27th September – I wonder how long I am going to be able to resist as that is also my pay-day! Here is the link to it on the Waterstone’s website if you’d like a sneak-peak: Grimm Tales: For Young and Old 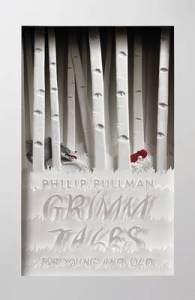 Grimm Tales: For the Young and Old
Source: Waterstones.com

I have always loved fairy stories. I was told tales about fairies, pixies and brownies by my Grandma and my Dad read Lord of the Rings and The Hobbit to me at an absurdly young age. I feel like I learnt to read with these magical tales and now, whenever I feel like a bit of harmless escapism, I will pull down my Hans Christian Anderson collection or look up Seven Miles of Steel Thistles, an excellent blog on this subject. I particularly love the darkness in fairy stories and that is why I think Philip Pullman is an inspired choice as editor. He combines, in a modern way, that wonderful mix of innocence, adventure and danger that sums up the perfect fairy story.

I’ve just started to read The Snow Child, which takes its inspiration from a Russian fairy story. These ancient, simple tales still hold a huge sway on modern literature, from Margaret Atwood to this example by Eowyn Ivey. I believe that however sophisticated we become as a species, there will always be a place for fairy tales.

I’ve had a wonderful Paralympic week, culminating in a session at the Athletics last night. It was absolutely awe-inspiring – the achievements of these athletes come across even more poignantly in person than on television. I had to bite back a  lump in my throat several times. The noise and colour of the stadium was also overwhelming – my pictures can’t really tell one thousand words here but give just a flavour of the magic:

So I’ve been waving my Union Jack frantically over the last week rather than writing my blog. However, I settled down on Saturday with The Telegraph’s Review supplement (all reviews here) because there was a rather tempting special on the literary treats that Autumn has in store! So far, I’ve added Ian McEwan’s Sweet Tooth, Zadie Smith’s NW, The Snow Child by Eowyn Ivey, Restoration and Merivel: A man of his time by Rose Tremain and Parade’s End by Ford Maddox Ford to my must-read list.

When I’ve not been at the Paralympics, I’ve been glued to Parade’s End on BBC2. I’ve never read or really noticed Ford Maddox Ford before, but I am enjoying this adaption so much. I also watched the documentary about Ford after the first episode. I would recommend it highly as it helped set the context of the novel for me. I really love the fact that Christopher, the hero, is such a man of principle. Honour is a quality often lacking in real life I think and I like reading about it. The documentary explained that in reality, Ford was a rather unscrupulous character and so he wrote Christopher as the man he rather wished to be. I think if I were ever to try to write something, I would also create a character who was everything I wished to be. It would be interesting to explore the consequences of that!